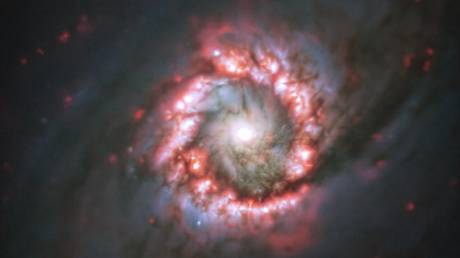 In a galaxy far, distant, astronomers have found an extremely stunning phenomenon which sees a star-bursting ring surrounding a supermassive black gap, just like the petals of a rose.

The European Southern Observatory captured the gorgeous stellar mild present because of the MUSE instrument on its Very Massive Telescope (VLT).

The magnificent picture captures the distant spiral galaxy referred to as NGC 1097, which is positioned 45 million light-years away from Earth, within the constellation of Fornax.

A supermassive black gap lies on the middle of the fascinating galaxy and the extraordinary ring of star-forming areas solely encircles it.

Analysis signifies that the glowing ring of star-forming areas have a community of gasoline and dirt that spirals to the black gap. The ESO mentioned the picture reveals a “textbook instance” of a star-bursting nuclear ring.

The ring births new stars because of an influx of fabric in direction of the middle of the galaxy. It stretches roughly 5,000 light-years in diameter, which means it’s dwarfed by the total measurement of the galaxy which extends tens of hundreds of light-years past it.

The darker lanes captured within the MUSE picture present mud, gasoline and particles being funneled into the supermassive black gap.

“Close by mud is heated up and star formation accelerates within the space across the supermassive black gap, forming the star-bursting nuclear ring proven in pink and purple tones within the picture,” it added.

MUSE, which stands for Multi-Unit Spectroscopic Explorer, is hooked up to one of many 4, 8.2-meter telescopes that make up the Very Massive Telescope. Its distinctive design permits researchers to map advanced mechanisms inside many galaxies and analyse the formation of stars and star clusters.

The telescope is positioned on the ESO’s Paranal Observatory within the Atacama Desert of northern Chile.