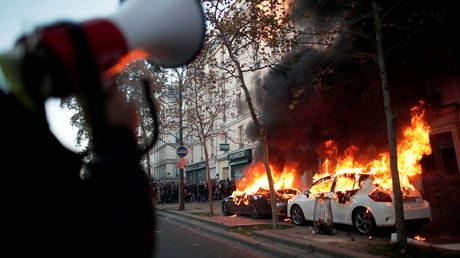 Violent clashes and arson have erupted in Paris amid mass protests towards police brutality and a draft legislation that may ban filming officers “in sure circumstances,” after a video emerged of cops beating a black music producer.

1000’s of individuals rallied towards the controversial invoice in additional than 70 French cities on Saturday, with the organizers claiming over half 1,000,000 individuals and authorities estimating the quantity at round 150,000. The daytime rallies went slightly peacefully, however by early night clashes erupted in a number of cities, together with Rennes, Lille, Bordeaux and Lyon.

At one level, protesters set the doorway to France’s central financial institution on fireplace, whereas firefighters struggled to succeed in the scene by way of the streets blocked by police fencing, makeshift barricades and burning trash.

Sporadic clashes with smaller teams continued into the night time, lengthy after the majority of the demonstrators had left the Place de la Bastill, with lots of of officers in full riot gear seen chasing protesters down facet streets, struggling to comprise the unrest.

Whereas it was not clear what number of protesters have been injured in clashes, native media reported not less than 37 officers obtained accidents throughout France, whereas making not less than 46 arrests.

The demonstrators are voicing their anger over a draft legislation on public safety, which was accepted by the decrease chamber of the parliament this week. The controversial Article 24 of the invoice seeks to guard law enforcement officials from doxxing and harassment, and bans filming of cops on responsibility and sharing their photos on-line with an “intent to hurt.”

Critics say the invoice infringes on journalistic freedoms and can be used to intimidate those that wish to expose police brutality and different misconduct. One such incident went viral this week after the footage was leaked exhibiting French police beat and racially abuse a black man, apparently for not carrying a face masks.